It’s no secret that I found a love of sewing lingerie.  I’d kept everything pretty soft on that front though. The world of rtw Bra’s however can be a mine field. I decided to tackle that ever elusive, fitting bra. Hoping to find one that stayed put, didn’t dig in or keep falling off my shoulder.  Grab a cuppa, this is an epic length of  blogness.

I was struck by the lingerie bug back in 2017 when I fell for the Rosie Bralette by Evie LaLuve. It was pretty, comfy and was perfect for those days where I just didn’t want to be dealing with much in the underwire dept.  I could use those delicate laces I’d gathered along the way and those small pieces of jersey I had left over too. The pattern has since been discontinued but there are so many lovely bralettes out there we’re now spoilt for choice. 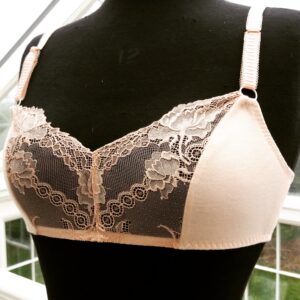 After making many Rosie bralettes I decided to try my hand at the Harriet bra by Cloth Habit.  At the time it was all a bit new to me.  I’d got the hang of elastics and hardware but wires, they were a relative unknown.  After I’d made a toile up in cotton scraps and kind of got the fit, I used a kit I’d picked up to make Harriet in a beautiful lace.  It went together like a dream but when I went to fit the wires in I found they were too long.  There are so many options and I would say ask your supplier if you’re unsure which wire is best for the pattern.   I read many a blog on how to shorten them but never quite got around to it.  Life gained pace and I put it to one side for a while. 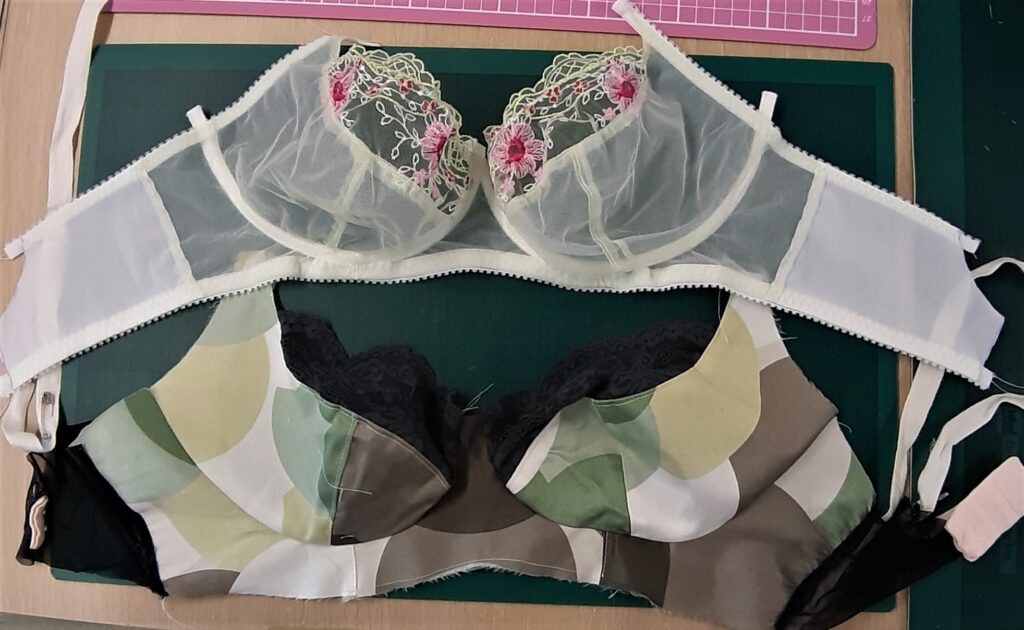 Well, 4 years and a world pandemic later, I fancied having another go.  I had also bought the bra fitting book by Norma Loehr of Orange Lingerie about bra making and Fit.  The crux of most bra issues.  I read it from cover to cover.  So many things to think about but the detail and way that it’s written make it less scary.  To find the right shape I started with the bridge.  (The centre piece of your bra) I found the right shape, an opportunity in itself. Turns out fitting card between your boobs is an interesting concept and not quite so simple. Goodness me though, worth the fiddling.  Turns out I don’t have that much space between them.

I bought another couple of kits and, yup lost my sew jo as the world went into lockdown.  I know a lot of people found solace in their sewing during that time, it’s my life and living and as such was brought to a very abrupt halt.  Sew jo went on a break as they say.

However, as things started to open up and I was able to start a few classes, the sun began to shine and my sew jo returned.  There were t- shirts and tops and I began to look at my forthcoming wardrobe.  A lot of things were snug.  My bras were also showing their wear.  Did anyone manage to successfully buy a bra in lockdown?  I looked at the pattern and fabrics again and decided to take the plunge once more.

After seeing many different beauties on insta I ordered the Black Beauty bra back in 2020.  Watching Erin make a few different bras  peeked my interest again.  Sewing Chest had a black beauty kit as a tester for fit.  I’d seen Sew Sarah Smith make it up and thought it was a great idea as a trial.  It had everything you’d need except the wire.  Oh boy, the confusion.  There are so many wires!  I worked out what I thought I’d need then asked for advice to make sure I was going down the right route.  Sewing chest were brilliant!  Sending a couple of the right shape to make sure one of them would be the right size.

When I purchased the pattern I think I must have gone by the general size I normally wear.    Because as much as I tell everyone that size is meaningless, go by measurement, I couldn’t possibly be more than my M&S 34 D.  Hello reality.  It strikes me too.  I needed to get over that blip.  I re-took my measurements and found I’d blossomed a bit during lockdown.  Which brings me beyond the size for the range that I had bought. 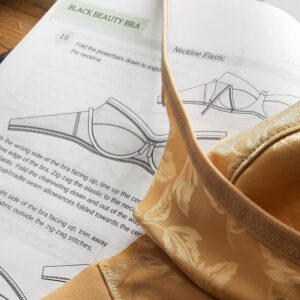 I made the first up in a standard 32 DD View A.

I followed the very comprehensive instructions and, blow me, it looked like a bra!  It felt like a bra, sadly didn’t fit quite as a bra should.  This shouldn’t have been a surprise as the measurements didn’t lie.  I checked with Norma and the bridge alteration I’d done before had worked a treat but the back band needed to be shorter, I reduced it by 1cm.  The sides also felt like they could be deeper by 1.5cm   The cups did overfloweth.  Quad boob has never been a look I’d admired.  So I needed to try a bigger cup.  The band and cradle were fine so I looked at the sister size for the proper size that I should have been making.  A 32 E.  My flat chested teenage self would have been wide eyed in disbelief. 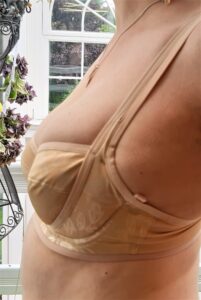 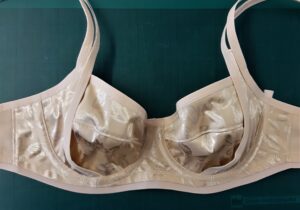 Now just a word if you’ve not delved into bra sizing before, as sizing goes, a 34C is the same cup size as a 32D so as a result I could look at the 34 DD cup to use with my bra cradle and be closer to the right cup size.  Erin explains it really well in this Blog Post

Fortunately the trial kit comes with enough fabric to make at least two trials and I had enough random elastics to finish the bra, though the casing didn’t quite make it to the edge.

As I wanted to deepen the band and use a larger cup I checked the sizing of both next to each other.  Turns out that the cups needed that extra depth so I was on the right lines of things.   Depth was added to the band in relation to the cups and the back was scooped out so that I could keep the fastenings to two hooks.  For further insight I’d really recommend a read of Norma’s book or at the very least visit her website.  She also does an online course if that’s more your thing. 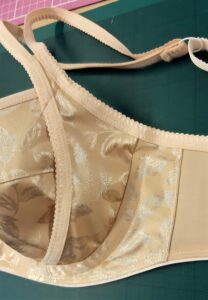 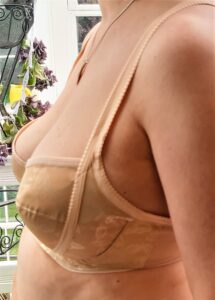 The second bra was a much bigger success. My boobs were pointing in the right direction, the band was comfortable and no more quad boob.  A hit!  The power band on the side didn’t feel like it was doing that much on the first but I think that was down to the sizing issues.  On the second I could feel it bringing everything to the fore.  No side boob here.

Supplies were checked, I needed to get just a few more elastics to make up in that fateful lace that I’d tried the Harriet in.  Again, the sewing chest were really quick in sending out everything I needed.  (This isn’t an ad, just an honest opinion of their service)  I was very restrained as I do feel I should use up some of my own stock before I get carried away buying again. 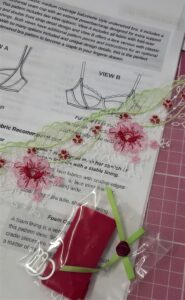 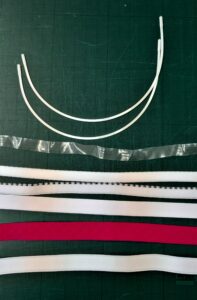 The lace was a different animal to sew than the fabric.  Not unexpected but a reminder that everything was a lot finer and more able to waft off the table as I was cutting and piecing together.  I like to lay all of my pieces out so that I can see just what I’ve got to put together.  I used View B for the lace as it allowed for seam allowances and lining but other than that the pattern was the same with the adjustments I’d made.  I could have taken slightly more care putting the cups into the cradle, I’ve got a couple of tucks in there where my seam edges got a little wayward but overall I’m pleased with it.  I’ll use more pins or invest in some clips next time. 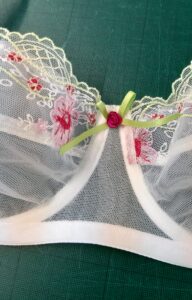 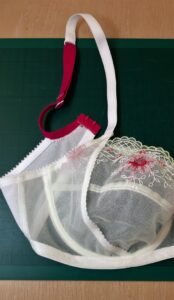 It’s comfortable!  It fits!  I may never cross the thresh hold of M&S lingerie department again.  Or only for inspiration.  There’s a beautiful black lace kit waiting in the wings which I think will be next.  I’m not done with bras.  As I said at the beginning, there are so many pretty patterns out there now.  I think I should give the Harriet another go. 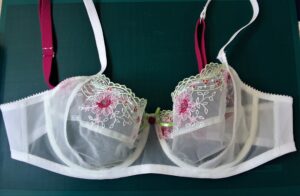 I also feel I need to practice more.  We never stop learning and I’ve really enjoyed the process of this.  It’s also helped me come to terms with my own figure.  As things have been very stationary for the last 18 months my figure has changed.  I’ve tried to keep on top of it but I know it’s a long process to accept your own body and it’s growth spurts.  We are all a work in progress.

Also a well fitting bra can make the difference between being comfortable in your clothes and being aware that your boobs need readjusting every half hour.  They need care and a good fit of whatever style of underwear you choose to wear.

So, what next?  More bras for definite and a few summer dresses so that I have a wardrobe that’s not so snug.  Have you tried sewing lingerie?  Have you tackled lace?  Let me know how you get on, I’d love to hear.