Dinosaurs and Dressing up
Written by Pippa
Category: reviews, sewing

Why don’t we dress up?  In these days of staying home I think we should take a lesson from the smalls in our lives.  They don’t care if they don’t have a party to go to or if they need to see anybody on a zoom call. If they fancy dressing up as a princess or a dinosaur they just do it.  We should be more smalls.  It’s very easy for us to throw on the same old thing because we’re not going anywhere or the delivery driver is used to seeing people in their lounge wear now.  I’ve taken to pulling at least one new thing out the wardrobe a week to air the usual work wear.   I’m “dressing” to go to the supermarket! Though I think I’ve forgotten how to walk in heels.

Anyhoo, I digress.  When pressing my brother for ideas on gifts for his smalls, monkey or dinosaur outfits came up.  Well, what better excuse do I need.  I can see the tail already.  Pintrest is full of tails.  Do I just do the tail or make something more…?  I’d picked up the hug hoodie by made it patterns a month or two back and had already made a small sweatshirt version for the tiniest of nieces.  What else is an aunty for but to do the fun stuff. 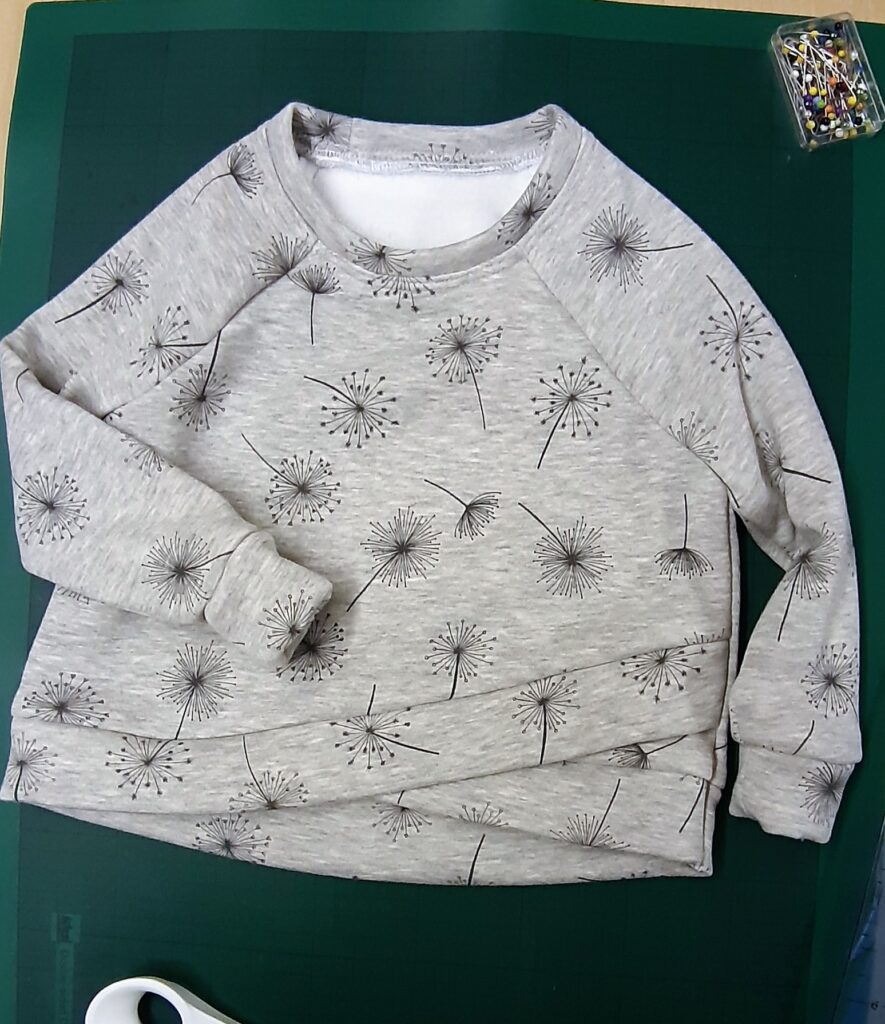 So, dino hoodie it is.

Time to raid the stash.  I had some green fleece left over from a project years ago. This is why I never throw fabric out.  I was sure I’d got other colours…All I found other than green was the unicorn fleece from when I made her last hoodie.  I couldn’t bring myself to use a bright turquoise with a straight green so then sat back and thought some more.  I needed something that would work with the fleece and would wash in the same way.  Out of the corner of my eye I caught sight of the mending/no longer fit pile.  T-shirts and tops that were never going to fit again.  Sorted!  I pulled them out and wondered at the range.  Did I ever even wear that lilac top?  I looked at them with the fleece and the red top popped.  One less to deal with and a few to pop into the charity pile because, reality hit.

The hood is already cut in a pair so next I had to decide how I was going to put the spikes down the back.  I could add a seam allowance on the centre back and cut a pair but I decided to add it and cut on the fold.  It gives a neater finish and it’s one less process for me to deal with.  Once I’d cut out he fleece I had to work out how to do the spikes.  Flat or stuffed?  As I didn’t have much time or stuffing I decided flat, folded spikes.

I cut the top into strips varying the depth so I had different sized spikes to play with. then cut them into squares, folded them in half then into points. The jersey was tamed a little with the iron but it still tried to curl a bit. I played with the spikes until I was happy with the placing and stitched them into the hood first.  I was starting to think a full sized hoodie could also work… 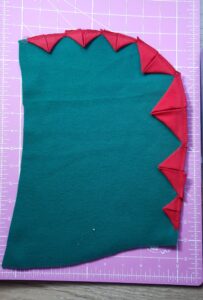 As I’d made quite a few spikes I popped a couple on the front too.  I toyed with adding claws to the cuff but had a quick word with myself at adding to the pressure.  Before I added the hem band I made up the tail. There was thought of doing a removeable tail but it’s not dressing up if your tail falls off is it. I went more by eye and size of the fabric left so was a little surprised when it came out a bit long.  Dinosaurs had long tails though so it would be fine.  It’ll be interesting to see her on her bike wearing this. 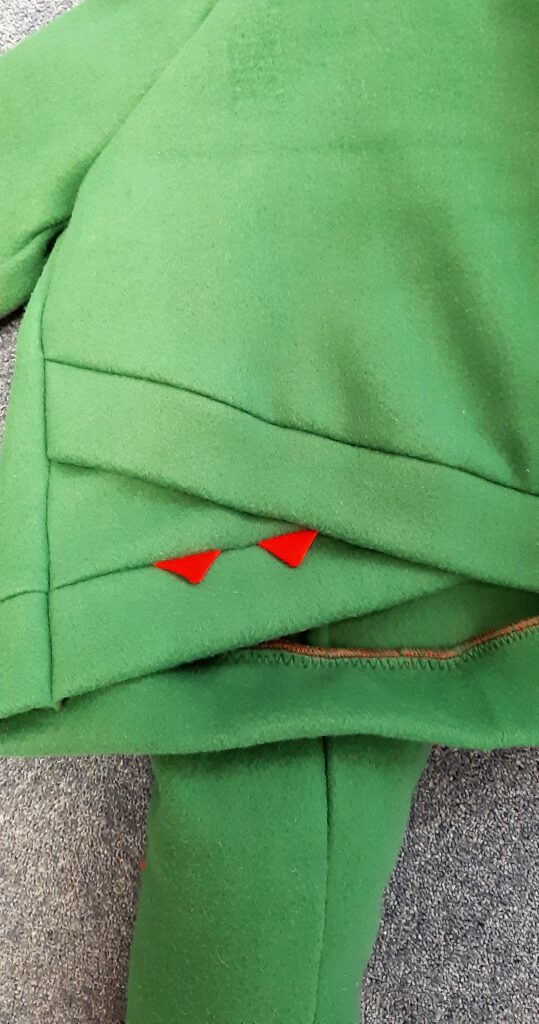 The hood was lined with some viscose jersey I’d had left from a wrap dress.  It’s kind of pebbly and seemed to work really well.  More of the small scrap stash used. 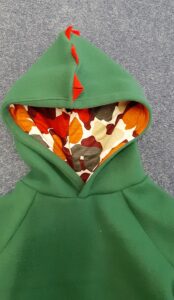 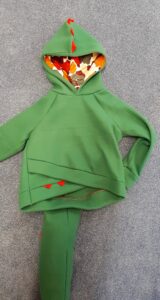 I’m really pleased with how this came out.  A hoodie is the perfect foil for so much dressing up I can see this will not be the last.  The hug hoodie was a dream to put together too.  The front piece is on the opposite side to normal because I cut out at night when I was tired so didn’t notice the wrong side of the fabric was uppermost.  My dino wearing niece wont care. 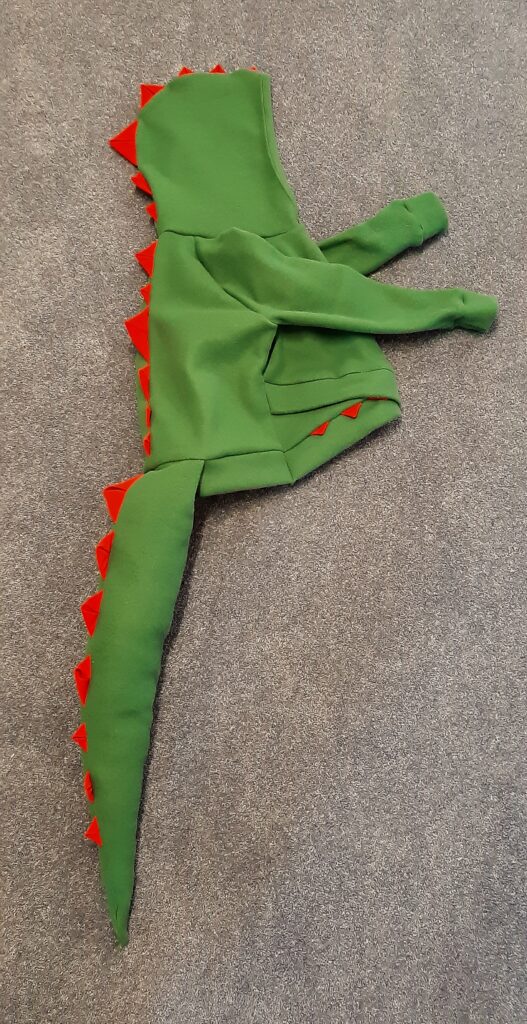 I think we should all take a page out of the dressing up book.  We don our Christmas jumpers without a second thought.  Lets make the rest of the year a place to wear dino hoodies or super hero hats.  I’m stopping at underwear over tights mind.  Nobody needs to see that unless your Val Kilmer or the like… Was that a rubber suit?  Where is that Bat man DVD? 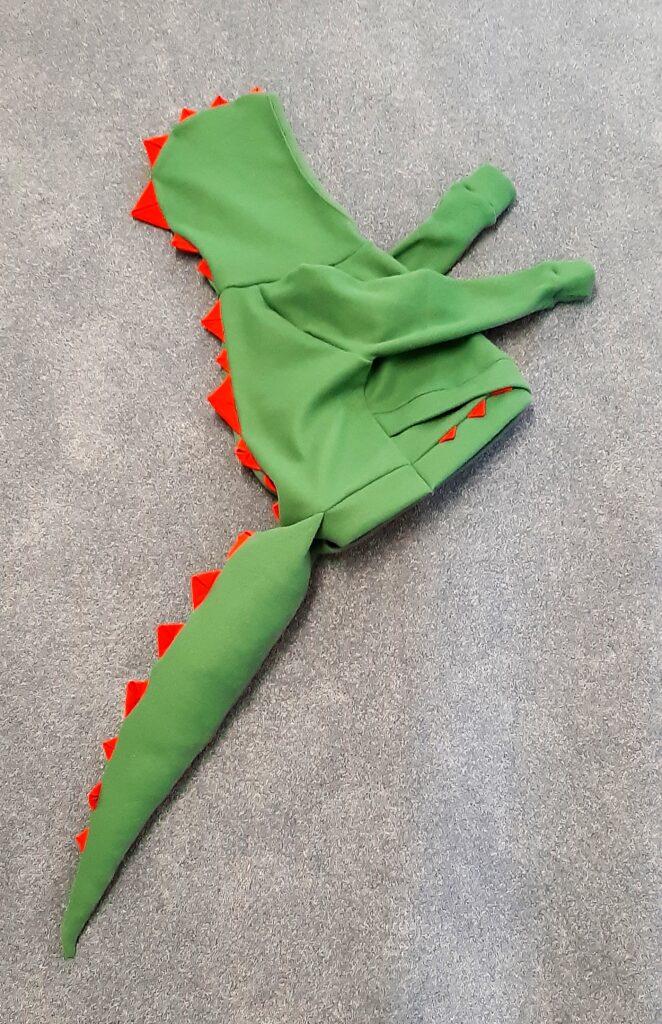